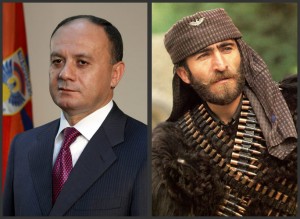 The tradition for not punishing military personnel for violence has been set by none other than Colonel-General Seyran Ohanyan, Defense Minister of Armenia, on June 19, 2005. That day Seyran Ohanyan, then the Defense Minister of Artsakh, together with a number of high-ranking military officials—Samvel Karapetyan, Vardan Balayan, Artur Harutiunyan, Vladik Khachatryan, as well as current Defense Minister of Artsakh, Movses Hakobyan—subjected Artsakh war veteran Pavel Manukyan to a severe gang beating within the walls of the Defense Ministry. The incident became a scandal both on TV, and in media, however, it didn’t get as much public attention as it would today thanks to the social networks. Numerous articles were written about the violence committed by High-Ranking Generals, the Armenian authorities called on the their counterparts in Artsakh to conduct an impartial investigation of the matter.  The former Artsakh President, Arkady Ghukasyan, promised to guarantee unbiased administration of justice.

However, until today neither Colonel-General Ohanyan, nor his brothers-in-arms, have been held responsible for committing violence, gang beating, inflicting life-threatening physical injuries or for abuse of power. On the contrary, their military careers had impressive growth. That same administration that demanded an impartial investigation of the matter, eventually promoted Seyran Ohanyan to Defense Minister of the Republic of Armenia, and Movses Hakobyan, his accomplice in the violence, was promoted to the office of Defense Minister of Artsakh.

Even Dashnaktsutiun, which demanded the resignation of all the offenders who had participated in the severe beating of their party member Pavel Manukyan, unbiased investigation of the crime and fair punishment for the guilty, soon withdrew all those demands. Such abrupt change of position was certainly conditioned by the pressure from the authorities, as well as by their fear of losing their portfolios in the ruling system.

In June 2005 the opportunity had come to put a stop to widespread abuse of power and violation of human rights in the ranks of the Armenian army, which would serve as an example and teach a lesson to all servicemen working in the military administration. Unfortunately, the chance was missed, which was the equivalent of giving a green light to unrestrained violence in the army.

Today Major Sasun Galstyan, notorious for humiliating and beating two soldiers in the scandalous video recording, is being charged with something, which is only a fraction of what Colonel-General Seyran Ohanyan is supposed to have been charged with because of the gang beating in June 2005. How can Armenia’s Minister of Defense Seyran Ohanyan punish an officer, for whom he himself has served as an example with his vicious conduct and gotten away with it. And how can an officer refrain from committing violence if it leads to promotion?