This is the 23rd Annual National Meeting of the Armenian Bar Association, which took place on May 19, 2012, in Glendale, CA.

Ursula Kazaryan has later contacted us with request to amend a few of the figures she used in her presentation. She had intended to recalculate the figures to fit American standards (such as football fields instead of hectares) and, unfortunately, did not change the measurements, so that a few of the numbers are, in fact, wrong as presented. Below are the corrections: 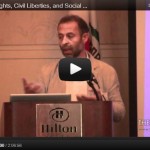