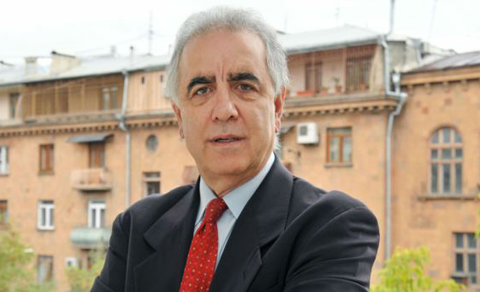 Three young Armenian entrepreneurs rented a cart last month at the Americana — a large shopping-restaurant-theater complex in Glendale — to sell T-shirts, hats, and other clothing items advertised on their shop1915.com website.

On February 12, the opening day of their business, the three Armenians were unexpectedly told by Americana’s management to keep their cart family-friendly and remove all pictures of protests. Even though there were no pictures of any protests on the cart — just posters of people wearing the T-shirts on sale — Chuldzhyan told The California Courier that she immediately took down the posters to avoid any conflict with Americana.

On Feb. 25, Americana issued an ultimatum telling Tina and her two partners that within 24 hours they had to change the kind of merchandise they were selling, claiming that there had been public complaints about the ‘genocide’ clothing. Otherwise, they would have three days to vacate the premises.

Fearing that they were on the verge of eviction, the three entrepreneurs agreed not to display the Armenian T-shirts, and sell them only if requested by a customer. Later that afternoon, an Americana official reiterated that all clothing items with the ‘genocide’ theme had to be completely removed from the cart.

This was a clear interference in the three Armenians’ business. Americana had no right to ban the sale of ‘genocide’ T-shirts — a violation of the owners’ freedom of expression. Furthermore, the T-shirts I saw while visiting the cart last week did not carry the word genocide, but had the following inscription: “WE ARE STILL HERE – 2015.” There were other T-shirts for sale displaying just the letter P for Pentagon Records, the name of the Armenian entrepreneurs’ company.

It is not certain if anyone had actually complained to Americana’s management about the Armenian T-shirts. No one had ever said anything critical to the owners of the business. Moreover, even if someone had complained, does it follow that Armenian clothing, with or without the word genocide, should not be sold at Americana? This is a slippery slope! Should anyone complain about Holocaust and Genocide books being sold by Barnes & Noble bookstore at Americana, would the shopping center’s management ban the sale of such books? How about the movie theaters at Americana showing films that may be offensive to some shoppers?

Realizing that Americana was violating her civil rights, Tina consulted an attorney to see what legal steps she could take to defend her business interests. She informed the lawyer that her contract with Americana did not prohibit the sale of genocide themed clothing. The contract simply restricted the sale of pornographic material, drug paraphernalia, and second hand merchandise. The attorney told Tina that even though Americana’s actions were clearly illegal, she had no choice but to comply, since she was up against a major corporation with a powerful legal team.

While disappointed that she was unable to defend her legal rights, Tina decided to follow her attorney’s advice, and reluctantly complied with Americana’s illegal and draconian orders, not to lose her fledgling business. “I felt as if I was back in the prohibition days, selling bootlegged merchandise,” Tina told The California Courier.

Last week, Tina continued to receive warnings from Americana not to display any genocide related clothing, even after she had taken down all other Armenian T-shirts, except the one that said, “WE ARE STILL HERE – 2015.”

This controversy goes far beyond the personal interests of three young Armenians. Americana’s actions affect the civil rights of all tenants and the entire Armenian community, particularly on the eve of the Armenian Genocide Centennial. Glendale Armenians and city officials, who had granted Americana generous tax exemptions, should immediately intervene in this matter, by defending the rights of these three small business owners.

Americana is owned by Rick Caruso who has enjoyed friendly relations with Glendale’s large Armenian community. Hopefully, Mr. Caruso will take the necessary corrective steps when he learns about his staff’s inappropriate and illegal actions.

No one from Americana’s office responded to my phone call, after I left a message requesting an explanation for the ban on the sale of Armenian clothing.