Vendors say they were told to stop displaying clothing making reference to the Armenian Genocide. 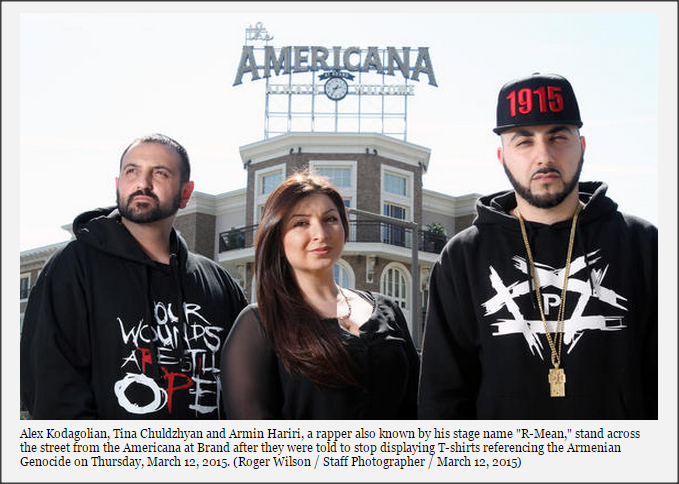 The management team at Americana at Brand is taking heavy flak from the local Armenian community after allegedly telling a cart vendor at the outdoor mall to stop displaying T-shirts and hoodies for sale that referenced the Armenian Genocide that happened a century ago.

In 2013, Pentagon Records started making clothing that read “Our wounds are still open 1915,” while another item saying “We are still here 2015” came out earlier this year.

The company was co-founded by local Armenian rapper R-Mean.

On Feb. 12, R-Mean — whose real name is Armin Hariri — said he started selling his products with business partners out of a cart at the Americana after getting approval by mall officials. He was told the same day by the shopping center’s staff to remove a poster that depicted celebrities wearing the clothing items.

Less than two weeks later, he said he received correspondence from Americana’s management to remove any articles of clothing connected to the genocide, which puzzled him because the word genocide wasn’t printed on anything. The only reference was the date when the massacre of 1.5 million Armenians took place, 1915.

He said he was told that guests at the Americana had complained about the clothing.

Tina Chuldzhyan, a production manager for the record label, said the correspondence she received stated she had to remove the apparel in question or their lease would be terminated.

She added an agreement was reached that would allow the vendor to still sell the clothes, but not have them openly displayed.

Once word on social media got out, the Americana posted an apology on its Facebook page directed at the vendors.

“We would like to apologize to our cart tenants, Tina Chuldzhyan, Alex Kodagolian and Armin Hariri, for the regrettable misunderstanding regarding their cart’s merchandise,” the message read. “The cart tenant is more than welcome to have its product in question displayed on the cart.”

Caruso Affiliated, which owns the Americana, issued a statement Thursday saying it has a variety of tenants at all of its properties and takes great pride in the diversity of its guests.

“While we regret if any of our guests are upset, Caruso Affiliated’s greatest priority is and always will be making our properties family-friendly and welcoming venues for all guests,” according to the statement.

However, Caruso Affiliated did not respond to the News-Press’ questions regarding the claims made by the vendors.

Chuldzhyan said that, as of Thursday evening, she has not directly received an apology nor was she told she could hang up the T-shirts and hoodies again.

“I’m not going to be doing that until I hear correspondence because I don’t want to be in the wrong,” she said.

The cart was up and running as of Thursday — without the clothing on display — and Hariri said he’d like to keep it in business for as long as possible.

Nearly 200 people responded to the apology on Americana’s Facebook page with most of them criticizing the mall.

A protest at the Americana is being organized by the online blog “The Truth Must Be Told” and is scheduled for 6:30 p.m. Friday.

Glendale Mayor Zareh Sinanyan said he was dismayed when he heard the news about the clothing, adding that Americana’s management had a knee-jerk reaction to any complaints there may have been regarding the clothing and that the Americana’s relationship with the Armenian community has been tarnished.

“There has to be some kind of reasonability standard,” he said. “And again, in the city of Glendale, for them to be so insensitive to what constitutes a large portion of their customer base is beyond me.”