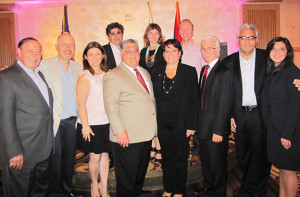 “…send me more ‘ians’ [Armenians] to Sacramento to start with, and from there we’ll head to Washington together,”- Katcho Achadjian, California State Assembly member and candidate for US Congress, October 24, 2015, Armenians & Politics Panel of 2015 ANCA-WR Grassroots Conference.

On March 15, 2016, the Armenian National Committee of America (ANCA) announced their endorsement for the 25th District of the California State Senate. Running for this seat are a couple of candidates of whom I have personal knowledge. One is Chris Chahinian (D) and the other is Anthony Portantino (D).

I am a lifelong Democrat and believe that voting is not about supporting those who campaign under my party name, but rather the one who represents the values for which my party claims to stand. With this said, I would like to introduce you to the candidates as I know them. Chris Chahinian (I know him as Khatchik) is someone I’ve known for my many years as a human rights activist. Whenever there is an issue with negative effect on the Armenian community, Khatchik always does his best to seek solutions. As someone whom I have always known to speak the truth, Chahinian has been the voice of reason among those with radical ideas. He has always been encouraging solutions that would help the Armenian community as a whole to uphold its dignity. I know of no ‘dirt’ about Khatchik to point at. He and I share many core values. I think he is a noble man who is fit to serve our community and the best interests of the people.

As for Anthony Portantino, I’ve known him for the last few years. I had heard his name in the past, but only got to know his true personality and values, when I chanced upon him at the center of a corruption during my investigation into the Pasadena Armenian Genocide Memorial Committee (PAGMC). My investigation resulted in a series of articles exposing corruption in the Armenian Diaspora at a scale I had not witnessed before (see Pasadena Armenian Genocide Memorial Committee in Crisis). The Portantino I got to know up close, behind his mask of ‘a friend of Armenians,’ is someone who uses Armenians for their voting power. He treats them as voters rather than constituents. On multiple occasions, Anthony Portantino has violated the law to use the non-profit PAGMC to engage in political campaigning. His illegal actions jeopardized the PAGMC’s 501(c)(3) status. You can read more details about this in Crisis at Pasadena Armenian Genocide Memorial Committee Continues.

Taking the above into consideration, whom do you think the Armenian National Committee of America endorsed? Logically speaking, and what I believe is best for the community as a whole, Chris Chahinian, the Armenian. But the reality is that the ANCA has endorsed Portantino (see “ANCA-WR Endorses Anthony Portantino for California State Senate”).

Why have they done this? You will have to ask them. In fact, if you are interested in asking, there is an opportunity to do so this weekend at a public event they are holding Sunday morning at 8:00 a.m. The venue is a hike and an opportunity for “discussing your concerns with Anthony, one of the friendliest, most approachable, and straightforward elected officials you’ll ever encounter.”

Details of the event which were announced by Garen Yegparian on March 15, 2016 are as follows:

Ara K. Manoogian is a human rights activist representing the Shahan Natalie Family Foundation in Artsakh and Armenia; a Fellow of the Washington-based Policy Forum Armenia (PFA); creator of www.thetruthmustbetold.com and author of the white paper “To Donate Or Not to Donate”, an in-depth study on the activities of the “Hayastan” All-Armenian Fund.