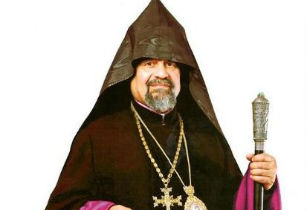 Archbishop Aghan Baliozian, Primate of the Diocese of the Armenian Church of Australia and New Zealand, was listed as a KGB agent, codenamed “Zorik” in the papers of former KGB archivist and defector Vasili Mitrokhin, which were released by the UK’s Churchill College Archive last month.

Born in Syria in 1946, the late Archbishop Baliozian arrived in Australia in 1975 to serve as Vicar General of the diocese of the Armenian Church before being appointed as Primate of Australia and New Zealand in 1982.

A highly respected religious leader and a well-known figure in Chatswood, Sydney, Archbishop Baliozian was strongly committed to ecumenism, working for cooperation and greater unity between Christian churches.

Archbishop Baliozian was awarded the Medal of the Order of Australia in 1995 “in recognition of service to the Armenian community” and the Centenary Medal in 2001, again for community service.

However, Mitrokhin’s papers on KGB espionage operations in Australia allege Archbishop Baliozian was recruited by Soviet intelligence in 1973 while undertaking theological studies in Yerevan, the capital of Armenia, then part of the Soviet Union.

According to Mitrokhin’s notes of Soviet state security files, Aghan Baliozian went on to work as a KGB agent while studying and teaching in Jerusalem in 1974, and maintained “ongoing communications in three countries”. He continued contact with the KGB after he transferred to the Armenian Church in Australia, according to the papers.

However, Mitrokhin’s papers also suggest that his performance in Australia was considered unsatisfactory. The third department of the KGB’s foreign intelligence directorate, responsible for operations in Australia, concluded Archbishop Baliozian had “insufficient operational training” and eventually discontinued his employment.

The precise terms of Archbishop Baliozian’s separation from the KGB are not recorded in Mitrokhin’s notes and it is not known whether he had any further dealings with Soviet intelligence in the 1980s.

Mitrokhin’s notes of KGB files record Soviet state security’s extensive efforts to recruit clergy as agents and informants, especially in churches with a significant presence in the former Soviet Union.

British intelligence historian Christopher Andrew, who collaborated with Mitrokhin on two books, claims that, during the Cold War the KGB recruited a number of representatives on the World Council of Churches, mainly from the Russian Orthodox Church but from other denominations as well, in successful efforts to influence the Council’s policies.

Archbishop Baliozian died in September 2012. More than 600 people attended his funeral at the Armenian Apostolic Church in Chatswood, including three archbishops from Jerusalem, India and Armenia.

Many NSW political figures paid tribute to the archbishop, with Liberal MP Jonathan O’Dea applauding his commitment to inter-religious dialogue as well as his abilities as an orator.

“Always approachable and gregarious, the archbishop was captivating as a speaker… He would simply speak from the heart, capturing the attention of young and old in his congregation and developing a strong and loyal following,” Mr O’Dea told the NSW Parliament.