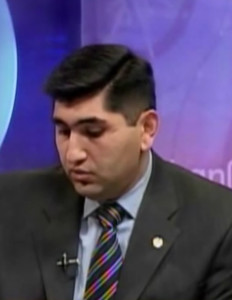 “You know, all kinds of things have occurred in the Fund’s history. Again, very frankly, openly I’m talking to you: they’ve stolen money, eaten it, and what not. It has happened,” confessed Sarkis Kotanjian, Executive Director of “Hayastan” All-Armenian Fund U.S. Western Region, in a conversation, which took place at a restaurant in Glendale, on December 17, 2010, and which I have decided to publicize today, on November 22, 2015. The full transcript is available for free here and on page 124 of the third (latest) edition of “To Donate or Not to Donate,” a white paper on “Hayastan” All-Armenian Fund)

Before or after making statements that exposed his own lies carefully manufactured to misguide public opinion, this high-ranking Armenia Fund official was repeatedly asking me not to publicize the content of our conversation. “I know that your heart is good. If I knew that you were just bashing the Fund just for bashing, I wouldn’t meet with you,” he said to me.

Mr. Kotanjian admitted that the quality of road construction undertaken by the Fund is subpar: “For example, if you dig the Yerevan-Sevan highway, removing the asphalt, you’ll find concrete underneath. That’s called a first class road. Those roads, which we build in Armenia or Karabakh are not first class. There’s no concrete underneath.”

About Armenia’s government officials and illegitimate President Serzh Sargsyan, who form the majority of the Presidium of “Hayastan” All-Armenian Fund, Mr. Kotanjian had the following to say: “All of these guys, Ara, keep pocketing, like there’s no tomorrow.”

He also passionately shared with me his vision of the savior-president: “It’s gonna be a guy with balls. We’re talking about BALLS. The only thing that is needed is a guy with BALLS, who will come and say: ‘Fuck your mothers, have pity on our people. As much as you’ve eaten… Enough is enough!’ And that businessman, that same Dod himself has to eventually understand that it’s not beneficial for him to get constant phone calls from Serzh saying: ‘Give! The army needs a tank, 20 million.’”

I still chose to honor his multiple requests of privacy even after he fiercely opposed to my suggestion that he should tell these truths publicly as a way of building trust. “For me, as a Fund official, […] Are you fucking kidding me?” he told me in response. Nevertheless, I hoped that one day Mr. Kotanjian himself would eventually realize the importance of honesty. I hoped he would take steps or start a movement to separate the Fund from the corrupt government, about which he said: “But look, we know how the government has fucked up.” And later on, he adds: “That government is shit. We all know this. We don’t talk. I don’t talk about it publicly.”

During the past 5 years, not only did Mr. Kotanjian fail to tell the people the truth, but also continued using lies, white-washing, and fake identities to mislead hundreds of thousands of people into trusting his organization and donating millions of dollars to it.

Moreover, Mr. Kotanjian did not hesitate to launch a smear campaign against me. He started off by creating a fake online identity named ‘Pahakazor’ to invalidate the facts presented in “To Donate or Not to Donate,” a white paper on “Hayastan” All-Armenian Fund. “Thus assuming a fake identity, Sarkis Kotanjian was praising and promoting the Fund by giving false testimony,” says my report on Mr. Kotanjian’s foiled cover-up.

Secondly, he defamed me publicly claiming that anything written in the mentioned white paper is a lie. “The thing is that this paper, one could say, is completely based on newspapers, which are strictly oppositional; their publications, which have no facts,” he said during a live interview on Horizon TV in Glendale, CA, on November 21, 2011. His comments were preceded by the Fund’s Executive Director Ara Vardanyan’s following statement: “We have studied the material quite seriously. The report is based entirely on inaccurate information, which has nothing to do with the All-Armenian Fund at all. […] There was absolutely no truth regarding the All-Armenian Fund.”

Thirdly, Mr. Kotanjian and his boss, Mr. Vardanyan, broke their promise to have a live TV debate with me about the Fund’s activities. The worst attempt to prevent me from disseminating the truth about the Fund occurred on November 24, 2013, when persons connected to the Fund’s leadership tried to have me arrested in Glendale on false charges of threatening an Artsakh government official (details at Human Rights Activist Threatened By Persons Claiming To Be Sheriff’s Deputies).

Mr. Kotanjan has abused my promise to honor his appeals for privacy with his actions. I believe it is better to honor the hundreds of thousands of donors’ rights to information than the dishonesty of a single hypocrite who seeks to profit from their ignorance. Thus, I present the full transcript of my conversation with Mr. Kotanjian. (See the appendix #13 in the latest edition of “To Donate or Not to Donate,” on page 124).

Ara K. Manoogian is a human rights activist; a Fellow of the Washington-based Policy Forum Armenia (PFA); creator of www.thetruthmustbetold.com; author of the white paper “To Donate Or Not to Donate,” an in-depth study on the activities of the “Hayastan” All-Armenian Fund