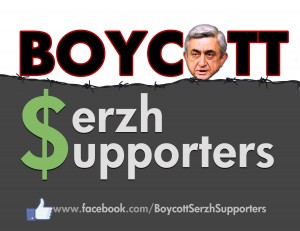 The mission of Boycott Serzh Supporters is to boycott all political parties, financial institutions, politicians, public figures, secular and religious organizations that recognize Serzh Sargsyan as the legitimately elected President of Armenia or have refrained from taking a stand on his legitimacy, by:

If a blacklisted entity chooses to re-evaluate their stance, we encourage them to issue a public statement of regret and apology for having recognized Serzh Sargsyan’s fraudulent victory in the presidential vote, and their name will certainly be removed from the blacklist.

Party of Rule of Law

Catholicos of All Armenians Karekin II

Politicians (excluding the members of the RPA and Rule of Law)