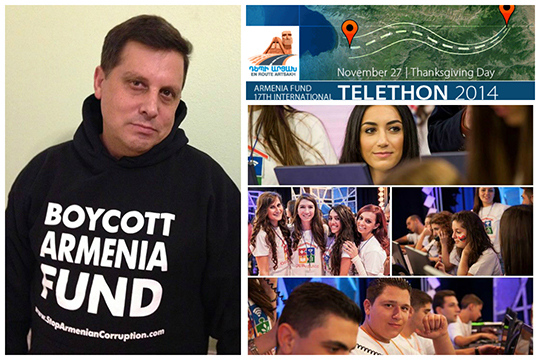 Today in Los Angeles the annual “Armenia” All-Armenian Fund annual telethon is taking place. Meanwhile, in different European cities fund-raising banquets have already been arranged, during the course of which a certain amount of money has been raised.

The “Armenia” All-Armenia Fund banquet in California, however, was joined by a boycott action. A group of American-Armenians, on the day before organized a protest in front of that hotel, where at that time, with the participation of the Republic of Mountainous Karabagh (Artsakh) president Bako Sahakyan, Archbishop Barkev and others, the Fund’as annual fund-raising banquet was taking place.

Wearing “We are boycotting the All-Armenian Fund, collect taxes, not donations” shirts, a few American-Armenians were distributing flyers, urging banquet-goers not to have a fund-raiser. During an interview with“First News”, American-Armenian journalist Ara Manoogian said that there is no necessity for organizing a fund-raiser. They are against that fund-raising, since they believe that, instead of collecting contributions, the government of Armenia must collect the taxes. “The government of Armenia would do well to collect taxes appropriately, from the oligarchs, and government employees, and not organized a fund-raiser. Thos unpaid taxes alone every year have a value of approximately 500 million dollars. Aside from those, the government is managing the funds in a faulty manner, from which close to 250 million dollars are being lost. That is, every year Armenia receives a loss of close to 750 million dollars, which is more than the amount of the fund-raising every year,” said Manoogian.

According to the journalist’s comments, at the same time it is very wrong that the “Armenia” Fund administrative council direct the man who occupies the chair of president of the republic and representatives of the government’s close entourage. “That is very wrong. Since the “Armenia” Fund administrative council is made up of directors of government bodies, that already ceases to become a benevolent fund, since we all know, have heard and have evidence that those individuals are thieves, starting with Serzh Sargsyan, Gagik Harutiunyan, and ending with the others. They are stealing common people’s monies,” said the interviewee.

And then, according to Manoogian, Armenia with its own means can solve its issues. “For that reason we propose that people not donate money. Armenia neither needs gifts, but needs normal government, which does not steal from its people and is accustomed to solving issues by its own means. To build a road, renovate a school and other projects, on which the funds collected by the Fund are spent, is the immediate responsibility of the government of Armenia and Artsakh. They are obliged to care for those issues with the taxes collected from the people. That must not be the responsibility of the Diaspora. If the Diaspora has something to do, that is what is not the immediate responsibility of the government. That is our protest,” remarked the journalist.

During his interview with us he also said that he has evidence that after the fund-raiser certain individuals are able in Armenia to already receive their monies. And then, he with his group has found that a portion of funds directed to the Fund for various projects is being absorbed. A lesser amount is being spent for the project than that allocated for it. “After all that, I personally am not prepared to donate a single penny to the Fund and urge the same to everyone,” concluded Ara Manoogian.

(Translation by The Truth Must Be Told)