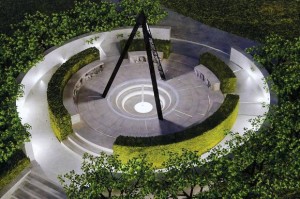 A model of the Pasadena Armenian Genocide Memorial
(© latimes.com)

Pity the caring activists working diligently to seek recognition for the Armenian Genocide. Pity the dedicated members of the community seeking to create dignified local monuments to appropriately mark its horrific events.

Both causes have been dealt a serious blow by allegations that a local charity was abused by campaign operatives under the control of perennial candidate Anthony Portantino. The calamity at the Pasadena Armenian Genocide Memorial Fund Committee will be long remembered as an example of what can go wrong when someone marked by unbridled ambition chooses to manipulate a pure cause, and how such abuse and politicking can sully such causes.

In a world where skepticism always plagues everything, and other Armenian relief charities have been plagued by similar allegations, this tragic story is the worst possible thing to have happened.

Below is what we know. Former Assemblymember Anthony Portantino has been raising money for his future ambitions, both Congressional, and State legislative, for about three years now, since at least 2011, however, since he has been out of office now for so long, the money has withered and dried, so he apparently became desperate to curry favor from rich donors especially on causes that he has pontificated on. Enter the Pasadena Armenian Genocide Memorial efforts and his nefarious plan: Portantino volunteers his time to them, but allegedly, it was just to get access to their donor lists. Portantino gets his operative David Gevorkyan appointed Treasurer of the outfit, and he himself also serves on the board charged with overseeing the charity’s activities.

There’s only one problem. Actually, we really can’t drill it down to one problem, because there are several! First, Gevorkyan allegedly lied about his qualifications that would allow him to be entrusted with money. Simply put, he allegedly has none, but allegedly told a series of fibs, in writing, about his qualifications. Allegedly, similar lies got him removed from the Pasadena ANCA board, an established, respected and most pre-eminent organization.

Next, Gevorkyan allegedly consistently and repeatedly failed to file the required legal documents with the state to allow the charity to do what it exists to do, e.g., raise money! The big irony here is that Portantino, who sits on the board, and so desperately wants to be a state elected official, allegedly ignored these fundamental and basic alleged violations of state law.

If the story ended here, it would just be sad and likely illegal, but it doesn’t end here, it gets much worse.

Portantino allegedly exploited the charity for his political ambition, doing such things as controlling the invitation list, allegedly working to omit anyone in a political spat with him from helping the charity, if it meant they might get any public recognition.

Portantino also allegedly secured the names of the biggest donors from the charity’s rolls, and cross-solicited them to contribute to his political campaign, a blatant violation of charity ethics laws.

The tragedy in all of this of course is that the Monument in Pasadena, a beautifully planned marker of the Armenian Genocide, that countless people worked tirelessly on, will not break ground on time. It is already well behind schedule, and these allegations and potential illegal cross over of the political into the charitable realm will not help the cause.

Memo to ambitious candidates: if you get your campaign operative on a charity board, don’t lie about his qualifications, degrees, and training; don’t ignore state law when you seek to be a state official; and for the love of God, don’t exploit a pure cause for your own political ambition.

Special thanks to Ara Manoogian at thetruthmustbetold.com, and all the people who wrote in about this story.