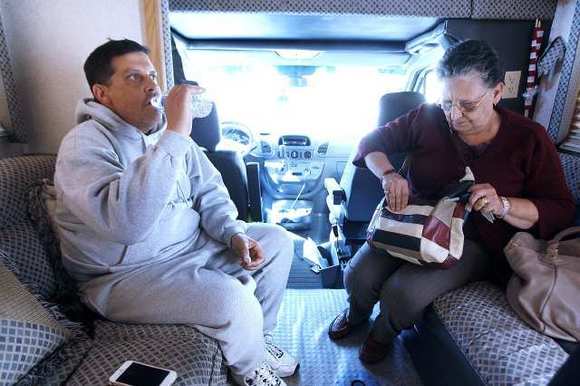 Ara Manoogian hadn’t eaten for nine days as of Monday, and he was prepared to go without food for weeks, or even months, more.

Camped in an RV parked outside Rep. Adam Schiff’s Burbank office, Manoogian said his hunger strike was in protest of President Obama’s congratulatory remarks toward the re-elected president of Armenia, Serzh Sargsyan, amid allegations of election fraud and bribery following what Manoogian called a corrupt regime.

“When the president congratulates something, that means you, me and everybody else that’s an American citizen is congratulating this person,” Manoogian said, adding that Sargsyan is using the remarks to legitimize his election. “Our values are being manipulated and misrepresented to other countries.”

Manoogian — Burbank resident — lived in Armenia for eight years, but moved back to the United States in 2005 after his work as a human rights activist and investigative reporter left him in fear of his safety.

“That is who Serzh Sargsyan is,” Manoogian said.

Via a letters sent through Schiff’s office, Manoogian is asking Obama to retract his congratulations.

“Our office has passed Mr. Manoogian’s comments and concerns to the White House and State Department, as we have done when others have raised concerns about administration actions,” said Schiff spokesman Patrick Boland in an email. “We will, of course, alert him when we receive a response.”

Manoogian isn’t expecting a response from the White House any time soon, but he expects he can survive without food for at least 2 1/2 months, having packed on an extra 20 pounds last fall to prepare for the strike.

In the three weeks before officially declaring the strike, he gradually cut out fried food, junk food and meat, running on just fruits and vegetables for a week until forgoing food entirely on March 17.

Meanwhile, he plans to take his camper across the country to Washington D.C. to build awareness and political pressure while stopping in different cities to educate people of his cause along the way.