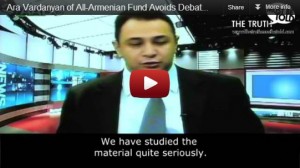 A screenshot from a live TV nterview with Ara Vardanyan and Sarkis Kotanjian in Los Angeles, in 2011

As the Catholicos of All Armenians Garegin II encourages his flock to donate to the “Hayastan” All-Armenian Fund, being one of the members of its Presidium of the Board of Trustees, the Fund’s effectiveness is questioned on Facebook.

The 24-hour ban on my expression in Facebook has just expired. This was the price I had to pay for posting a critical comment in the Facebook group of Syrian-Armenian Relief Fund (SARF) under the shared link to an article by Harut Sassounian, Editor-in-Chief of the California Courier, “Aleppo Burns while We Fiddle: A Wake-up Call to All Armenians” with regards to “Hayastan” All-Armenian Fund.

Among other issues in his article, Sassounian also touched on the regrettable insensitivity of “Hayastan” All-Armenian Fund and its affiliates toward the critical condition of Syrian-Armenians, “as reflected in the inexcusable decision of allocating to them a mere 10 percent of the proceeds from this year’s Thanksgiving Telethon”.

Sarkis Kotanjian, Executive Director of “Hayastan” All-Armenian Fund, U.S. Western Region, objected to this criticism, saying that every donor is free to indicate the cause for which they would like to donate, and these funds would be added to the 10% of the overall proceeds. This triggered a discussion between Kotanjian and Sassounian, who said it should have been the reverse – 100% of the donations to Syrian-Armenian relief, except for those earmarked for other charitable causes. However, Sarkis insisted on his point. Then I chimed in the conversation with a video, which shows how Sarkis usually treats any kind of criticism directed to the organization he represents – absolute denialism. Here is my comment:

I get what you are saying loud and clear, Harut. The problem is that Sarkis and the people in Armenia who control the Hayastan All-Armenian Fund don’t want to get it. A clear example of what you have just faced in Sarkis’ comments can be found at: http://www.youtube.com/watch?v=F3baibznwBg&feature=share&list=UUbXRxcqV6FEPNDKf3HUtBsw

The comment included a link to a video of a live TV interview with Ara Vardanyan, Executive Director of “Hayastan” All-Armenian Fund, and Sarkis Kotanjian on the Hertapokh TV show with the late Armen Dilanyan, which was aired on Los Angeles-based AABC TV channel three days before the Thanksgiving Telethon 2011. In this video, the two executive leaders of the Fund try to give reasons for backing away from Vardanyan’s own challenge to debate with me on key issues regarding the Fund (see “To Debate Or Not to Debate About “Hayastan” All-Armenian Fund?”) as thoroughly analyzed in “To Donate or Not to Donate,” a voluminous white paper on “Hayastan” All-Armenian Fund. In doing so, they made insulting remarks about me and even made an absurd claim that there is “absolutely no truth” in that white paper.

However, that comment of mine was soon deleted, and it was deleted again after I re-posted it a little later. No matter how many times I re-posted it, someone deleted it. I contacted the administrators of the SARF, Miro Khanzadian and Sarf Hantsnakhump (who refused to identify him/herself), but they denied having deleted or knowing anyone to have deleted my comment. Who else has the authority to delete comments in a Facebook group if not admins or others by their permission? At any rate, that race ended in a complete ban of my activities by Facebook administration.

I had to go through various FB security checkpoints just to login, and when I finally did, I received a notification that read: “We removed content you posted. We removed the following content you posted or were the admin of because it violates Facebook’s Statement of Rghts and Responsibilities”. The content in question is my above-mentioned comment: 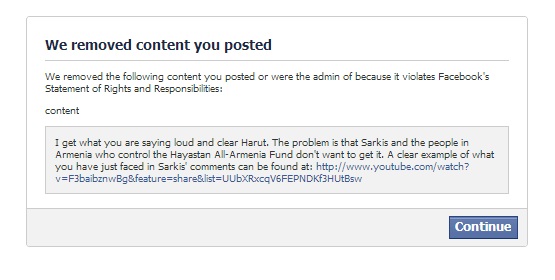 It is unclear whether the ban on my activities was a result of a specific Facebook algorithm programmed to block duplicate posting or a report by the admins of the SARF Facebook group. Though it is not undeniable that people mentioned in the content, namely Sarkis Kotanjian and “the people in Armenia who control the Hayastan All-Armenian Fund” did report it to Facebook’s administration, but it is obvious that the temporary ban on my Facebook activities does play into their hands. And if the ban actually is the consequence of multiple posting, then I have to make it clear that it was not spamming but my continuous effort to defend freedom of my speech against persistent application of censorship on the Facebook group of Syrian-Armenian Relief Fund.

I decided to clip a fragment from that full interview and present it to the public with English subtitles, so they can see for themselves a display of incompetence by the people who run the world’s largest Armenian charitable organization.