The power shift that occurred in Armenia, following Armenia’s first president Levon Ter-Petrosyan’s resignation in 1998, brought no significant improvement to the rule of law. Election fraud remained the authorities’ key tool of longevity. Levon Ter-Petrosyan’s administration had interfered with the Catholicos’ election of 1995, making sure Karekin I ascended to the throne. Robert Kocharyan’s administration also interfered, thus securing the election of Karekin II in 1999. 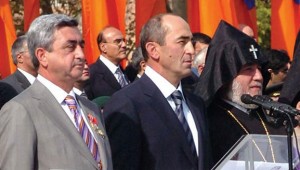 “It was no secret that President Levon Ter-Petrossian and his government were openly advocating the candidacy of His Holiness Karekin II (Sarkissian), Catholicos of the Great House of Cilicia. It was also no secret that members and representatives of the government were actively campaigning for his election,” said Dr. Dennis Papazian, Professor Emeritus at University of Michigan-Dearborn, and Grand Commander of the Knights of Vartan, an international fraternal leadership and service organization of Armenian men. Papazian, who was a delegate during the election of both Karekin I and Karekin II, approached a government official to query why the government had taken a position in the election.

“Most of the delegates,” the government official replied, “are good but simple people. Few of them know any candidate other than their own Primate. These are important times for the Armenian people. We have a free and independent Armenia, but we have many problems. […] Why should not the President of the Republic and Armenia’s chosen leaders give advice and counsel to those delegates who are not familiar with the candidates and their backgrounds. These issues need to be explained so that the delegates can be enlightened when they vote. It is not a question of pro- or anti-government, it is a question of what is best for the church.” 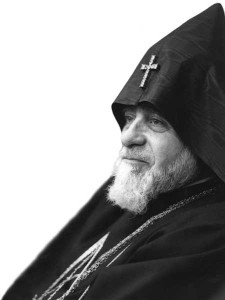 H.H. Karekin I, Catholicos of All Armenians (www.stsahmes.org)

However, in the case of the 1995 election, Dr. Papazian and others who shared the same concern decided against whistleblowing, simply because the government’s choice, Karekin I, coincided with theirs.

Thus, thanks to the government’s efforts and the complicity of the delegates, Karekin II, Catholicos of the Great House of Cilicia became Karekin I, Catholicos of All Armenians. His path was also smoothed over by his successor Archbishop Karekin Nersesyan’s withdrawal from the race. While this act was praised in some media outlets as selfless and magnanimous, the future Catholicos had been forced to withdraw from the race by the National Security Service (the successor of the Soviet KGB in the independent Republic of Armenia), which had material evidence in relation to his personal life that could discredit him once and for all.

Other irregularities observed by Dr. Papazian during both 1995 and 1999 elections were as follows: “First, the size of the delegations was based on estimates of the Armenian population of the various dioceses, not on baptized church and parish members. And secondly, as noted, the majority of the delegates seemed to have been appointed.” 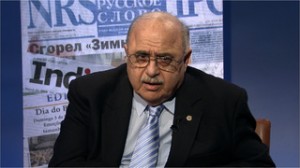 The government’s involvement in the 1999 Catholicos’ election process was met by a group of clergy with fierce opposition: “Recent observations show that the Armenian authorities at the highest level have come to a consensus favoring one candidate and are trying to install him on the throne.”. However, their opposition failed to change the course of the events. 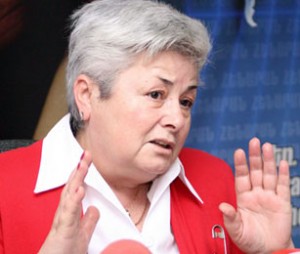 During the pre-election period, Hranush Kharatyan publicly criticized the flawed Catholicos’ election process, calling for immediate reforms: “I was often raising the issue that it was impossible to continue like this: to call something an election, which has nothing in common with election.”

Another delegate, who has chosen to remain anonymous, confirmed the fact of the government’s interference with the election process: “I knew, and everyone knew that the government was interfering.”

Robert Kocharyan’s administration picked Archbishop Karekin Nersesyan as the Armenian government’s choice of the Catholicos of All Armenians. However, despite being the government’s favorite, Karekin II became a target of bitter criticism in printed media.

“They discredited him a good deal and requested postponement of the election by a week, by a month, because the atmosphere was such that it was impossible to hold an election there. But they didn’t do it, because everything had already been organized,” said the anonymous delegate.

This delegate was yet another source, confirming Louise Manoogian-Simone’s allotment of $3 million dollars to secure the election of Karekin II by bribing both lay and clergy delegates.

Vazgen Sargsyan, then Armenia’s Prime Minister, who was in charge of the funds, was also reported to have resorted to excessive violence against delegates in pursuit of his goal to bring Archbishop Karekin Nersesyan to the throne. This topic will be covered in a later article.

As for the election fraud, said anonymous delegate described it as follows: “Not that votes were falsified. Everyone was under pressure. Everyone knows that. We were there. […] There were people from the KGB, because they were the ones who were exerting pressure. They would go to Etchmiadzin every day.”

On the election day, October 27, 1999, against the general rule of the Armenian Apostolic Church, according to which none other than lay and clergy delegates may be present in the voting area, there were numerous National Security Service agents and government representatives. They were occasionally using cell-phones, which is a violation of the church rule of no communication with the outside world. Aram Sargsyan, Vazgen Sargsyan’s brother, and a lay delegate during the 1999 Catholicos’ election, was also seen using his phone during the voting.

The terrible news of the Parliament shooting was announced only after Archbishop Karekin Nersesyan’s victory had been secured, and he had been announced the new Catholicos of All Armenians. Had they broken the news of Vazgen Sargsyan’s death before the end of the voting, the Catholicos of All Armenians might have been a different person today. Many of the delegates had been threatened and/or bribed personally by Vazgen Sargsyan to vote for Karekin Nersesyan.