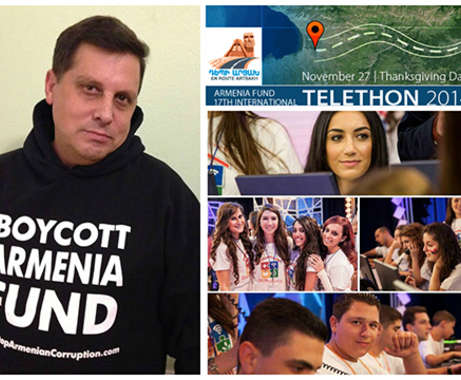 AZERNEWS picked up the November 27, 2014 1in.am new story titled “American-Armenians Boycott Armenian Fund Claiming A Normal Governmnet Is Needed Rather Than Donations” and put their own twist to it, placed it under the category. “Armenian Aggression”.

The U.S.-based Armenian diaspora, one of the basic sources of financing for Armenia, has refused to fund further the corrupted regime in the country.

A group of local Armenians in Los Angeles city protested the charity dinner of the All-Armenia Fund Hayastan organized to collect donations for the post-Soviet country suffering from high poverty and an ill economy.

“Armenia does not need gifts. It needs a normal leadership that doesn’t steal the wealth of its own people and that should be able to resolve its problems,” the Armenian media quoted a journalist Ara Manoogian, who took part in the protest.

Hayastan organized the annual TV marathon in Los Angeles on November 27. Before, the charity dinners were organized in various European cities, where certain amount of money was collected.

Armenians held protest in front of the hotel, where the charity dinner was held. The dinner was also attended by President of the so-called “Nagorno-Karabakh Republic” Bako Sahakyan.

A group of local Armenians in T-shirts with the words “We are boycotting Armenian Fund, collect taxes, not donations” distributed leaflets urging the diaspora to stop donating.

Manoogian said they are against this fundraising because they believe that instead of collecting donations, the Armenian government should collect taxes.

“The Armenian government should properly collect taxes from oligarchs and government officials, instead of organizing a fundraiser. These unpaid taxes make up $500 million annually. In addition, the government improperly disposes the funds and annually loses about $250 million. That is, each year, Armenia is suffering from losses of $750 million and this amount is much greater than that is collected through donations,” Manoogian said.

He explained how the rich Armenians living in the U.S. dodge the taxes under the name of donation to “Karabakh”. A group of wealthy Armenians in California in collaboration with All-Armenia Fund Hayastan carry out the money laundry over Azerbaijan’s Nagorno-Karabakh region, which is under occupation over 20 years. By this way, they deceive the U.S. tax system and evade from paying taxes.

“This is wrong. While the Board of Trustees consists of heads of government agencies, it cannot be considered a charitable foundation. Meanwhile we know well that all these people are thieves including SerzhSargsyan, GagikHarutyunyan and others. They steal the money of ordinary people,” Manoogian said.

Armenia can resolve the problems by its own efforts, Manoogian believes.

“That is why we suggest these people not to donate to Armenia. Armenia does not need gifts, it needs a normal leadership that doesn’t steal the wealth of its own nation and be able to solve its problems. Construction of roads, repair of schools and other programs implemented through donations collected by the fund are under direct responsibilities of the Armenian government. They should address these issues through collection of taxes. This is not the responsibility of the diaspora,” Manoogian said.

He added that he has evidence that after collecting donations, some individuals manage to get their money back in Armenia.

The corrupted government of Armenia has lost the trust of not only its citizens inside the country, but also the Armenians living abroad by their endless appeals to feed them. The geography of protests against the regime in the South Caucasus nation is expanding, however, involving new areas.