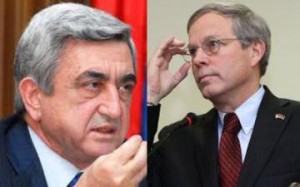 According to reliable information in our possession, yesterday, John Heffern, U.S. Ambassador to Armenia, has urged the Armenian authorities to refrain from covering up the whole range of election violations and to make a political decision to conduct a second round of voting.

The authorities turned down the ambassador’s offer, noting that although there had been election violations, they had not impacted the overall outcome. In response, the ambassador hinted that serious problems awaited Armenia, should the authorities refuse to compromise. The ambassador even predicted that, already a lame duck, Serzh Sargsyan may be unable to remain in power throughout his entire tenure. The Armenian authorities have interpreted these words of the ambassador as a threat.

It should also be mentioned that the Armenian authorities have also informed the Russians about all of this. That resulted in the Russian president’s hasty congratulations to Serzh Sargsyan over his re-election. And this was done when the results of the Presidential election are still preliminary, and Raffi Hovannisian, Serzh Sargsyan’s main rival, is not accepting Serzh Sargsyan’s victory.