Ara K. Manoogian started a hunger strike on March 17, 2013, as a sign of protest against U.S. President Barack Obama’s recognition of the Armenian Presidential Election 2013, which was marred with considerable fraud in favor of the incumbent, Serzh Sargsyan. Obama congratulated him on March 2, 2013 on re-election, which upset many U.S. citizens of Armenian decent, as well as Armenian citizens in Armenia, who believe their vote was rigged. 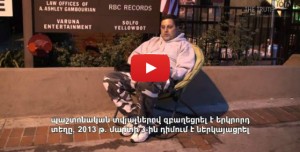