Home » Armenia » Corruption in Armenia » Election Fraud by the Numbers։ Response To Karekin II, Catholicos of All Armenians
May 1, 2013  Add comments 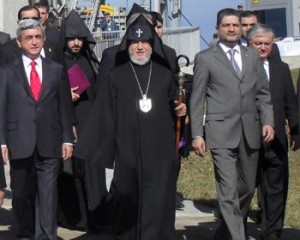 Karekin II Catholicos of All Armenians with Serzh Sargsyan and Tigran Sargsyan (© Epress.am)

On April 20, 2013, one day after Epress.am republished Ara Manoogian’s article regarding the October 27, 1999 election fraud which resulted in enthroning Karekin II, Catholicos of All Armenians, Fr. Vahram Melikian, Chief Spokesman of the Mother See of Holy Etchmiadzin, was quick to issue an official response and refute Manoogian’s statements about voter fraud that marred the election in question.  Fr. Melikian stated: “It is an overly mean step on the part of the author of the article and disrespect toward the memory of the Armenian Patriarch of Jerusalem, Archbishop Torkom II Manoogian.” Fr. Melikian went on to say that Manoogian’s claims were “absolute nonsense.” Effectively, Catholicos-Elect Karekin II is denying not only the occurrence of election fraud, but also having spoken about it to Archbishop Torkom II Manoogian, the late Patriarch of Jerusalem.

Although, on the Internet, there are allegations of electoral fraud that occurred during the Catholicos’ election in 1999, Ara Manoogian has referred to two real-life sources that confirmed the fact of election fraud. Unfortunately, one of them, Manoogian’s uncle, Patriarch Torkom II passed away in October 2012. And the other, as mentioned earlier, neither agrees to making a public statement on the issue, nor has he consented to having his name disclosed as a source. Under these circumstances, Manoogian is planning on submission to a polygraph test in order to prove that he is not lying about the statements made in the article on the electoral fraud during the 1999 Pontifical election. To ensure mutual trust, Manoogian suggests that the incumbent Catholicos Karekin II also submit to a polygraph test in order to refute the occurrence of fraud during his election, as well as having had a conversation about it with Archbishop Torkom II Manoogian.

However, before undergoing a polygraph test, Manoogian would like to share a few concerns with regard to the Pontifical pre-election period, specifically, verification of the number of voters.

As described in The Catholicoi of Etchmiadzin (1995), an historical overview of the electoral process, by the late Archbishop Mesrob Ashjian, the number of lay and clergy delegates, who are selected to cast a vote during a Catholicos’ election, is determined by the size of the population in a given diocese, where one delegate is designated for each 25,000 persons (p.135).

The election process of the incumbent Catholicos has followed the same rule. However, there is a major problem with the arithmetic. According to the official website of the Armenian Apostolic Church, 450 delegates cast their vote during the Catholicos’ election. Unfortunately, the same source does not indicate how many of them were members of the clergy. In an interview, Archbishop Tiran Kyureghyan, (who was defrocked by Karekin II in 2000) says there were 52 Archbishops, 37 of whom were ‘categorically against Karekin’. Another Russian source, Nezavisimoye Voyennoye Obozreniye [Independent Military Review], puts the number of the clergy at 47, but presents the total number of voters as 452. If we assume the number of the laypersons was 400, it implies that there are 10,000,000 members of the Armenian Apostolic Church all over the world. This appears to be an improbable number, considering that many Armenians in the former USSR had not been baptized by 1999.

According to Nezavisimoye Voyennoye Obozreniye, Armenia’s delegation consisted of 161 delegates. This means that, in Armenia, there were as many as 4,025,000 Armenian faithful alone. Etchmiadzin’s figure dwarfs even the data of the Statistical Service of the Republic of Armenia, which is known to exaggerate real numbers. Officially, Armenia’s de jure population, including the faithful, the faithless, the heterodox, and ethnic minorities, in 2001 was only 3,213,011. The Russian delegation consisted of 98 delegates, which implies 2,450,000 faithful of the Armenian Apostolic Church in the Russian Federation. However, according to the 2002 census, there was a total of 1,130,000 Armenians living in the Russian Federation. This means Etchmiadzin has more than doubled the real number. Nezavisimoye Voyennoye Obozreniye also states that there were 48 delegates from the U.S., which amounts to 1,200,000 Armenian faithful in the U.S. Comparably, this number appears to be more realistic.

Thus, especially the numbers referring to Armenia are grotesque against the backdrop of the mass exodus of the early 1990s. About a month before the Catholicos’ election, Vazgen Sargsyan, then Prime Minister of Armenia, said at the first Diaspora Conference in Yerevan that, since independence, approximately 600,000 Armenian nationals had left Armenia via the airport alone. One wonders how Etchmiadzin could explain the arithmetic that was applied in designating the delegation of laypersons and clergy to elect the Catholicos of All Armenians.

This outrageous exaggeration of the number of the voters by the Armenian Apostolic Church appears to have been the source of inspiration for the Republican Party of Armenia to use inflated voter lists as a major tool for electoral fraud during Armenia’s recent presidential election.

However, the arithmetical discrepancy is not the only flaw that marred the Pontifical election process.

A month before the Catholicos’ election, a number of prominent Archbishops of the Armenian Apostolic Church, including Archbishop Pargev Martirosyan, one of the candidates for Catholicos, as reported by Nezavisimoye Voyennoye Obozreniye, issued a common statement: “Recent observations show that the Armenian authorities at the highest level have come to a consensus in favor of one candidate and are trying to install him on the throne”.

Nezavisimoye Voyennoye Obozreniye also refers to election observers, who had emphasized that Archbishop Karekin Nersesian’s candidacy was promoted not only by then Armenia’s President Robert Kocharyan, but also ‘actively lobbied for’ by big financial centers of the Armenian Diaspora.

The ‘active lobbying’, referred to in the Russian report, sounds like a softened and censored version of the assertion Manoogian made in his first article on the Catholicos’ electoral fraud that then Prime Minister Vazgen Sargsyan used $3 million from a multi-million dollar donation by Alex Manoogian and his family members to buy votes and ensure Archbishop Karekin Nersesian’s ascendancy to the throne.