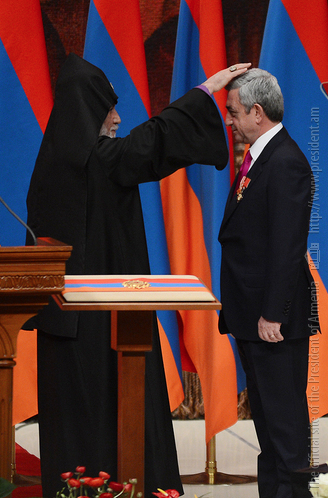 Many Armenian Apostolic Christians were very disappointed to see Karekin II, Catholicos of All Armenians, lay his hand on Serzh Sargsyan’s head, extending his Pontifical blessings to him on the occasion of the inauguration of the President of the Republic of Armenia, on April 9, 2013. The actions of Karekin II have widely been interpreted as blessing the widespread and well-documented electoral fraud committed to skew the outcome in favor of Serzh Sargsyan. But, perhaps, few of them know what might have made Karekin II more tolerant toward illegitimacy and fraud on such a grand scale.

As a result of the secret ballot election held in the Cathedral of the Mother See of Holy Etchmiadzin, on October 27, 1999, Archbishop Karekin Nersissian was elected the 132nd Supreme Patriarch and Catholicos of All Armenians. He was consecrated on November 4, 1999.

A few days later, I visited my uncle, the Armenian Patriarch of Jerusalem, Archbishop Torkom II Manoogian, in a hotel in Etchmiadzin, where he was staying. The Patriarch had just returned from a meeting with the newly elected Catholicos. He was noticeably upset and, out of frustration, shared with me what had just happened.

The purpose of the meeting between these two high-ranking churchmen was to discuss the voter fraud that had been observed during the election of the religious head of the Armenian Apostolic Orthodox Church. In response to the concerns of Patriarch Torkom II, the newly elected Catholicos said that it was too late to do anything about it. He advised Patriarch Manoogian to forget about the voter fraud, as the elections were already over.

That night I learned that Armenia’s Prime Minister, Vazgen Sargsyan, had paid out bribes to make sure Karekin Nersissian would be elected Catholicos of All Armenians. Later on, from sources that I presently cannot disclose, I found out that the funds used for the incumbent Catholicos’ election – around $3 million – were misappropriated from a multi-million dollar donation made by Alex Manoogian, his wife Marie, their son, Richard, and their daughter, Louise Manoogian-Simone, for the construction of St. Gregory the Illuminator Cathedral in Yerevan.

Coincidentally, PM Vazgen Sargsyan was shot dead, along with 7 other high-ranking Armenian government officials and parliamentarians in the chamber of the National Assembly on the same day as the election of the Catholicos of All Armenians, October 27, 1999, by a group of armed men led by Nairi Hunanyan.

These facts shed more light on the reasons why Karekin II, Supreme Patriarch and Catholicos of All Armenians, has tolerated obvious electoral fraud and blessed Serzh Sargsyan, the illegitimately re-elected Armenian President for a second 5-year term in office.