This is a compilation of various fragments from Ara K. Manoogian’s cross-country trip from Los Angeles, CA, to Washington, D.C., for the sake of democracy and rule of law.

The human rights activist had started a hunger strike on March 17, 2013, in protest of U.S. President Obama’s validation of election fraud in Armenia by congratulating the incumbent, Serzh Sargsyan, over re-election. He embarked on the cross-country trip on April 2, 2013 and finished it on April 9, 2013, in front of the White House. This is the footage of a future documentary called One-Dollar Democracy. 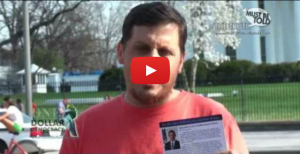