In Glendale, CA, the third March of Solidarity took place in support of the struggle against the consequences of election fraud in Armenia, and with the demand to restore Armenian citizens’ right to vote outside Armenia, on March 10, 2013. 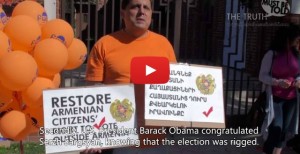