Patriarch of Constantinople, to

Karekin II Catholicos of All Armenians 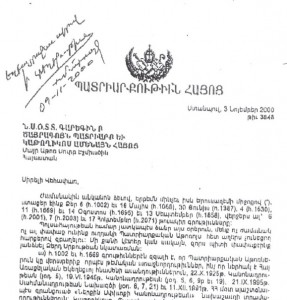 Specifically for Istanbul Armenians in these grave days, we have neither time nor desire to deal with issues that do not have direct relevance with our Patriarchal See. However, there are a few points that we would wish to bring to Your Holiness’attention.

1) From correspondence #1002 [May 6] and #1669 [August 11], it is evident that you relate with Patriarchal Sees as diocesan prelacies, which is contrary to the Armenian Apostolic Church’s age-old traditions, as well as the dispositions of October 22, 1925 By-Laws (art. 5); June 19, 1945 By-Laws (art. 5, 6, 9b and 19); September 21, 1995 Constitutional Outline (art. 6, 7, 21); and the introduction of the “Internal Diasporan By-Laws” officially registered in the Republic of Armenia on December 11, 1991. The Catholicos must not write letters of interference regarding the boundaries of a Patriarch’s authority. The boundaries of “Patriarch” and “Primate/Prelate” are historically not identical, nor are they synonymous.

2) Regarding the visit to be made to the Vatican (#1696 and #2002). We are wholeheartedly in agreement and supportive of You, when you pursue “the renewal and strengthening of our church’s ties with sister churches.” However, “the receipt of remains of [Saint Gregory] the Illuminator” seemed inexplicable to us. In Antelias, Jerusalem and Constantinople, Saint Gregory’s remains are kept in special and historic cabinets. We are certain that You have the remains of the Father of our Faith in the Holy See’s treasury. Why take a step which is going to be incomprehensible for the masses? Is the Armenian Church going to receive the remains of its first official Pontiff from Rome? Will there not be writers emerging in the future, who will hasten to remind us that even the remains of the Holy Illuminator, laid in the foundation of the Yerevan Mother Cathedral, consecrated during the 1700th anniversary, were made available by the Roman Pope? Should there not perhaps have been consultation with the bishops, or at least with the enthroned heads of the Patriarchal Sees?

3) There is another issue related to the Roman Papacy. In a few days You are leaving for Rome, and to date we have not received information as to what you are going to sign with the Roman Pope. It is essential to remember that any document, which has not been agreed to by any LAWFUL body of the church IN THE FIRST PLACE, will not have any canonical confirmation and will be judged in the category of Pontifical personal correspondence, just as indeed occurred with Your Predecessor of Blessed Memory in the case of His signed document with the same Pope [John Paul XXIII].

4) You have been Catholicos for one year already and you don’t have to take advantage of the “Interior Diaspora By-Laws” article V.68 in order to prove your authority. The “way” of terminating a diocesan primate/prelate is also important. Today, His Holiness the Pope himself does not have the right to suddenly terminate a bishop He chooses from his position. The Catholicos of All Armenians must also be guided by the prevailing rule of order and tradition. In similar cases, the accusation brought against the dismissed primate/prelate must be clear and evidential; a review board must be formed; the subject accused must be given the opportunity for self-defense; and then the outcome must be made public.

6) Outside of your immediate entourage, what do Armenians dispersed the world over think about the Church, the Holy See and their Apostolic Pontiff? The overwhelming majority does not read the Press Office news releases and follows the television programs with doubt and sharp criticism. The serious socio-economic issues, “the church is the people” motto’s practical insolvency, the church’s and clergy’s financial extravagances and vanity, the significant incommunicability of the medieval form, modus operandi, and self-expression; and, specifically, the immoral and unsuccessful condition of the spiritual mission are serious proofs that demand immediate research. There are yet issues of concern regarding Antelias-Ejmiatsin interrelations, inter-church and inter-faith relations, church-state interrelations.

Relative to the above and other instances, we are always ready to discuss with You, and we propose that on a convenient occasion when you are in Europe, perhaps only the three of us, the the enthroned heads of the’) Holy See of Ejmiatsin, Holy Jerusalem and Constantinople come together for a consultation.
Praying for the Lord’s Godly blessing upon You, the Pontiff, and the Brotherhood of the Holy See, we remain in humble prayer