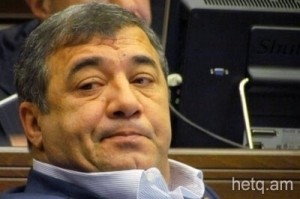 Ruben Hayrapetyan, a.k.a. Nemets Rubo, former Armenian MP and the current head of the Armenian Football Federation, is once again linked to a murder. In a video interview to Sona Davtyan of Iravunk, published on September 24, 2014, Vahe Shahmuradian, Armenian national hero Monte Melkonian’s former comrade, claims Nemets Rubo was involved in the assassination of at least two former ASALA (Armenian Secret Army for the Liberation of Armenia) members – Abraham Khamissian and David Davidian – in Yerevan, Armenia, in the second half of the 1990s.

It has been widely believed that ASALA was behind these murders, however, it was never established who carried out the dirty work. “They gave the money, and Nemets Rubo’s men did the killing as if ASALA had done it. But here they had no power to carry out such actions,” Vahe Shahmuradyan said (see video below).

ASALA, which operated from 1975 to the 1990s with intent to compel the Turkish Government to acknowledge the Armenian Genocide of 1915, was split over the disagreements with regard to the 1983 Orly Airport attack near Paris that left 9 people dead and 82 injured. Deeming the attack counterproductive, Monte Melkonian established ASALA-Mouvement Revolutionnaire. While Melkonian’s faction insisted on solely targeting Turkish officials, Hagopian’s group disregarded the losses of unintended victims and regularly executed dissenting members. Abraham Khamissian and David Davidian were among these dissenters. The former was assassinated on the Kievyan bridge in Yerevan, on August 9, 1996, and the latter shot dead as his three-year-old son watched, near the Republic Square in front of his home on Pavstos Buzand Street, on October 29, 1997. The forensic tests conducted by the Armenian police only helped to determine that the same gun was used to kill both victims.

Shortly after Armenia’s independence in 1991, David Davidian, a former member of Melkonian’s Revolutionary Movement,  moved to Armenia and volunteered to fight in the Artsakh liberation war. In 1994, Abraham Khamissian also moved to Armenia and worked for the Defense Ministry as an explosives training expert at the Monte Melkonian Military Institute.