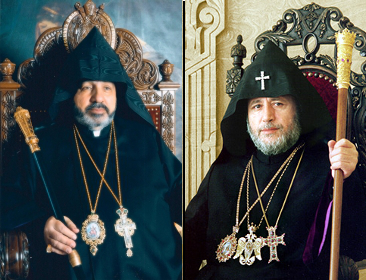 Below is a letter from Armenian Patriarch of Jerusalem Nourhan Manougian to H.H. Garegin II, Catholicos of All Armenians:

By chance, I obtained the news release about yesterday’s meeting of the Supreme Spiritual Council, whose participating members “after examination have accepted the resignation of Abp. Norvan Zakarian and […] they have submitted a petition to Your Holiness to confirm that.” It is under the heavy and unpleasant impression left upon me as a result of the decision made during that meeting regarding His Eminence Archbishop Norvan that I am writing this letter – simply compelled by the benefits of the Armenian Apostolic Church, the Mother See and the person of Your Holiness. The participants of the infamous July 31 meeting knew Norvan Srpazan as a dedicated clergyman, a kind and humble personage; therefore, what compelled them to make that fateful mistake?

I believe, when at the airport – the presence of others is not important – you demanded that Norvan Srpazan reinstate the so-named Father Vatche to his position, twice repeating: “If until July 1 you don’t reinstate him to his position, then you have no business with the Mother See,” you had already decided his destiny.

Your Holiness, if you allow it, I would say in a brotherly way, that a threat is not becoming for a clergyman, especially a high-ranking one, the “Supreme Patriarch of all Armenians,” from whom it is expected as from a genuine FATHER and forgiving SUPERIOR to relate with love and forgiving spirit toward his children or toward and in regard to his subordinates. How is it possible to ignore a church authority for the benefit of a simple priest; even if he is an individual endowed with certain merits, it was advisable that he serve the Mother See. Just as the beautiful nature needs free breath and light, while in closed and dark places its life becomes unhealthy and consequently suffocating and confining, the same is also the condition of social life, of organizations and religious institutions.

If I am not mistaken, the diocesan term of Archbishop Norvan was coming to an end this coming November, and that is when the members of the Supreme Spiritual Council could “accept” his resignation. Perhaps, do You truly want to eradicate your renown as “Constructive Catholicos” by extending the file of those declared as defrocked?

In any event, what has occurred was an unacceptable and great injustice coming from Holy Etchmiadzin, from the Armenian people’s Holiness of the Holy, and only the Lord knows how much the file is going to extend. Your Holiness, if you remember a few years ago, when with great pride – and justly so – you were showing me the beautiful buildings You had erected within the enclave of the Mother See, I said to You, that equal to and more important than physical buildings is reinforcing the spiritual building; and You reassured me that this would also happen. Nevertheless, the time has come to prove that it is the external and the financial that is essential and interesting to You. And two years ago, when you attempted to convince our ailing Patriarch Torkom to have a “co-adjutor” elected, and he refused your proposal; afterwards, You threatened Abp. Aris Shirvanian, who had said to You: “We did not have such an article in our by-laws,” and your threat was, “I will strip all of you of your ranks”. You repeated the same to me, and my response was: “Your Holiness, where are you going? Don’t you know anything else?” It is impossible that healthy generations mature in an environment of fear and threats, something which will cause our people and Mother Church to suffer, who more than ever have the need for puritan, civilized and true clergymen, and not toadies.

Consequently, with this writing I declare to Your Holiness that, having in mind the present tension within our church life, I have decided not to participate in the upcoming episcopal meeting to take place from September 21 to 28. Although Abp. Aris Shirvanian will be present, he does not represent the Patriarchate of Jerusalem.