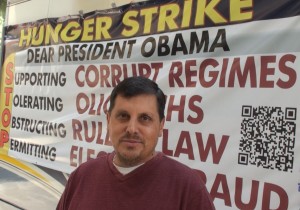 I have been on a hunger strike since March 17, 2013 to protest the recent premature congratulations offered to Serzh Sargsyan, by United States President Barack Obama, a mere 12 days after the Presidential Election in Armenia, held on February 18, 2013. It has been well documented that the election was marred with voter bribing, ballot stuffing, voter intimidation, multiple voting on behalf of émigrés and deceased individuals. All these variations of election fraud were committed to ensure the unconditional victory of the incumbent, Serzh Sargsyan. (For further details, see All about Ara Manoogian’s Hunger Strike for Democracy and Rule of Law at https://thetruthmustbetold.com/Obama).

In the context of the overwhelming evidence of widespread encroachment on popular sovereignty, U.S. President Obama’s approval of fraudulent election results is unbecoming of the leader of a nation that presents itself as a role model of true democracy for the rest of the world. Therefore, I wrote an open letter to U.S. President Obama, on March 12, 2013, asking him to withdraw his congratulation, which the fraudulently elected Sargsyan is using to legitimize his victory. (To read the open letter in its entirety, see https://thetruthmustbetold.com/obama-letter).

On March 21, 2013, I paid a visit to Congressman Adam Schiff’s office. I have been holding my hunger strike outside Schiff’s building, since it is the closest spot to a federal building we have in Burbank, CA. I had cc’ed Schiff the open letter and asked his help to make sure the President would get it. The following day I received a phone call from Schiff’s Chief of Staff in his Washington, DC office, informing me that the President’s staff had received the letter. Schiff had also instructed his staff to contact the State Department in order to get the letter into the Secretary of State’s hand. They asked that both the President and the Department of State provide a written answer to my letter. They also added that it may take weeks to get an answer. (For further details, see:  https://thetruthmustbetold.com/adam-schiff-response/).

Since the waiting period is going to be weeks, clearly, camping out in front of Schiff’s office in expectation of a response to my letter while starving is not going to be very productive. For this reason I have decided that I need to spread the word of how our elected officials are congratulating corrupt leaders and effectively doing this in our name (since they represent us), which not only soils our country’s reputation, but also empowers these leaders who often cause harm to common citizens of those countries (as in the case of Armenia). I would like to add that thanks to WikiLeaks, I learned for a fact that the U.S. government knew Sargsyan to be Armenia’s #1 oligarch, who controlled over half of Armenia’s most lucrative sectors and enterprises as of 2010. (For further details, see:  https://thetruthmustbetold.com/wiki-serzh-pyramid/).

The reason I’m writing to you is to ask for your help to finance a cross-country trip to Washington, DC, where I will continue my hunger strike in front of the White House. President Obama’s timely response will end my hunger strike.
My crew and I plan to embark on the trip on April 2, 2013. We are going to stop in many cities and villages along the way to educate common people about the above-mentioned issues and hear their voices. To accomplish this goal, I have started a fundraising campaign called One-Dollar Democracy. Please participate in this exciting undertaking by investing $1, which symbolizes your vote for Democracy and Rule of Law. Of course, I will gratefully accept larger tax-deductible donations, which will assure timely departure, thus my sufficient energy to efficiently carry out this endeavor.

For more details about this campaign and an opportunity to contribute online, visit http://www.OneDollarDemocracy.com/. Alternatively, you may send your tax-deductible contribution to: The Shahan Natalie Family Foundation, Inc., 3727 W. Magnolia Blvd., #215, Burbank, CA 91505.

I pray that we can collectively bring awareness to the American public of how Washington is really representing us outside our borders. I strongly believe that if we, the well-informed U.S. citizens, apply enough pressure, U.S. foreign policy may be adjusted to reflect the core democratic values upon which our great nation was founded.

I ask that if you believe in what was are doing, please share this message with all your friends and family.

With respect and gratitude,
Ara