A roundtable on Election/Post-Election developments in Armenia was organized by Policy Forum Armenia, on April 8, 2013, in Washington, D.C.

On February 18, 2013, Armenia witnessed a presidential poll, which left many independent observers questioning the integrity of the election process. Assessments by Policy Forum Armenia (PFA) and other observers put the opposition candidate ahead of the incumbent in polling stations where little or no fraud was observed. In polling stations where massive fraud was observed, the incumbent came ahead, having lost all major cities with the exception of the capital Yerevan, which he carried narrowly due to a small number of polling stations with suspiciously high turnout. The objectives of this roundtable discussion are to shed light on the mechanics of the election fraud observed in Armenia on February 18, 2013 and more importantly to discuss the ways forward for Armenia and the Armenian nation as a whole, ahead of important milestones—an official inauguration and large-scale protests and counter-inauguration by opposition, both scheduled on April 9.

Policy Forum Armenia (www.pf-armenia.org) is an independent professional non-profit association aimed at strengthening discourse on Armenia’s economic development and national security and through that helping to shape public policy in Armenia. 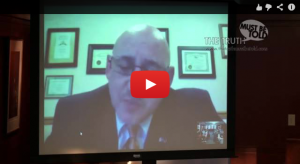