2016 California State Senate Candidate, Anthony Portantino, co-hosted a fundraising event, Dinner & Cigars, two years ago, in violation of the law. Organized at a prominent restaurant in Glendale, CA, on June 19, 2014, the event was attended by city officials and law enforcement agents from neighboring municipalities. 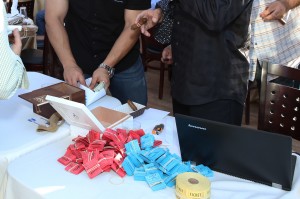 Although raising money for a memorial is a noble cause, the method of choice – a raffle – was not sanctioned by the Department of Justice (DOJ) as required by law. At the time, the PAGMC was not a registered 501(c)(3), nor had it been in good standing for a year. For these reasons, the PAGMC was not eligible to register with the DOJ the raffle that they, nevertheless, held. This violation of Penal Code Section 320.5, was a failure in part by David Gevorkyan, PAGMC’s treasurer and Anthony Portantino’s current campaign manager, who had claimed at the time that the PAGMC was compliant.

Additionally, California Penal Code section 319, which prohibits lotteries, states: “Any person who prepares or operates a lottery, furnishes lottery tickets, or assists in conducting a lottery is guilty of a misdemeanor and is guilty of a public offense punishable by imprisonment in county jail or state prison. The Attorney General, a district attorney, city attorney, or county counsel may take administrative or criminal action for violations of the requirements for conducting a raffle. The Department of Justice may seek recovery of the costs incurred in investigating or prosecuting an action against the organization.”

The violation of the law noted above, is just one example of Anthony Portantino’s irresponsible and illegal conduct. It was brought to the attention of the public at large on October 17, 2014, as a result of an independent investigation carried out by The Truth Must Be Told – “Crisis at Pasadena Armenian Genocide Memorial Committee Continues.” Watch a recent (May 28, 2016) TV discussion on Portantino’s other transgressions here.

Ara K. Manoogian is a human rights activist; a Fellow of the Washington-based Policy Forum Armenia (PFA); creator of www.thetruthmustbetold.com; author of the white paper “To Donate Or Not to Donate”, an in-depth study on the activities of the “Hayastan” All-Armenian Fund.