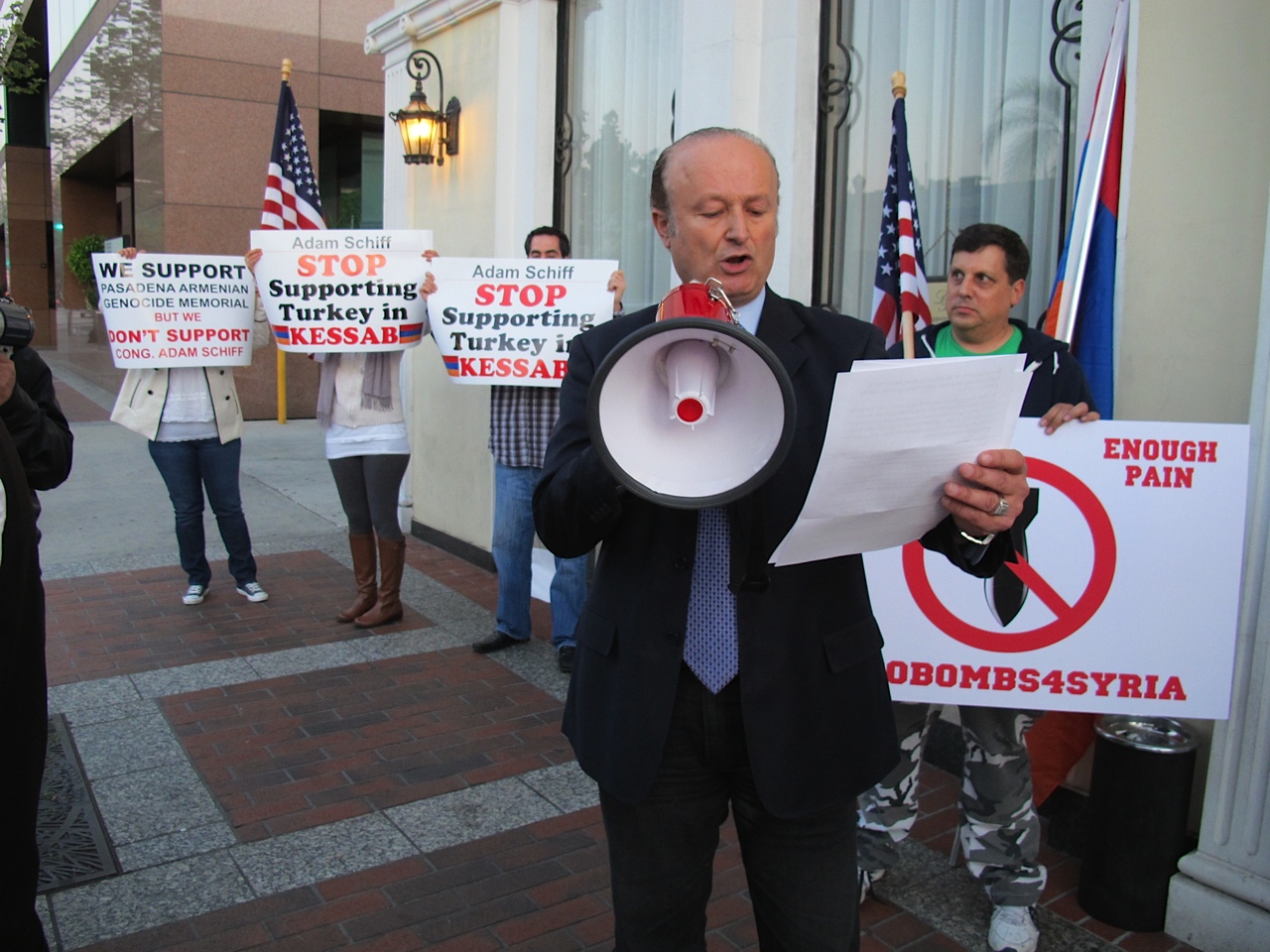 A group of concerned citizens staged a protest in front of the 28th Congressional District Office of Rep. Adam Schiff in Burbank, CA, on September 9, 2013, against U.S. military action in Syria. The gathering was triggered by U.S. President Barack Obama’s weekly address, on September 7, 2013, when he announced that he had asked members of Congress to debate and vote on authorizing the use of force against the Syrian government to punish it for the chemical attack carried out on August 21, 2013, near Damascus. Skeptical about the trustworthiness of the evidence implicating the Syrian government in the chemical attack, the protestors were demanding that Rep. Adam Schiff vote against any possible U.S. military action against Syria.

Some of the protestors, including Appo Jabarian, the publisher of USA Armenian Life magazine, Harout Bronozian, host of Veratarz TV Show, and I, Ara Manoogian of The Truth Must Be Told, visited Rep. Adam Schiff’s congressional office to meet with his staff and express our disagreement with Obama’s intentions to bomb Syria. Ann Pfeiffer, District Director, received us.

Jabarian said that the evidence Obama ascribed to the U.S. intelligence, was a lie, mentioning that there was plenty of other evidence indicating that the sarin attack was made by the opposition forces to trigger the U.S. involvement, which, they hoped, would put an end to Bashar al-Assad. I stated that we were against U.S. involvement in the conflict and U.S. support of the opposition forces swarming with al-Qaeda-linked terrorists. I also said that the U.S. government needs to get to the bottom of who is truly behind the chemical attacks against the civilians in Syria and punish them.

We asked an in-person meeting with Rep. Adam Schiff to discuss our concerns regarding U.S. involvement in the Syrian conflict. In lieu of a meeting, Schiff responded with a letter on September 13, 2013.

The plan to attack was soon cancelled after the Russian authorities brokered a deal by which Assad agreed to relinquish his chemical arsenal. Later on, as more information became available, it grew obvious that the Obama administration had used inaccurate intelligence information to build its foreign policy with regard to the Syrian crisis. “In some instances, [Barack Obama] omitted important intelligence, and in others he presented assumptions as facts,” wrote Seymour Hersh, a Pulitzer-Prize winning journalist, in “Whose Sarin?” where he exposed who was behind the chemical attack. Hersh provided compelling evidence that the opposition forces were responsible for it. In his most recent article, “The Red Line And the Rat Line” (April 7, 2014), Hersh was able to trace the supplier of sarin – the Turkish government, which also provided the training in producing and handling it.

Now that it has been established that Turkey provided al-Qaeda-affiliated terrorists with sarin, which the U.S. President feared might eventually be used against us, can we expect him to exercise his authority by the War Powers Act to take military action to degrade Turkey’s ability to produce and distribute chemical weapons?

The constituents of the 28th District of California would like to know whether there has been any change in Rep. Adam Schiff’s position regarding the Syrian crisis in the light of all the new evidence that has surfaced since September 13, 2013, when his latest letter pertaining to this matter was written.

On numerous occasions, since September 9, 2013, we have requested an in-person meeting with Congressman Adam Schiff to discuss his stance about the Syrian conflict to make sure that he truly reflects the position of the people he represent in Congress.