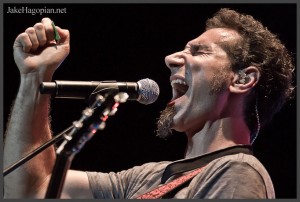 World-renowned musician Serj Tankian yesterday wrote an open letter to Serzh Sargsyan with regard to the recent Armenian Presidential Election and its outcome. Below is the full text of the open letter.

Congratulations on your victory.

Victory means getting the most votes, of course, in a democracy.

Based on the overwhelming reported fraud from many NGOs, irrespective of the OSCE report, it seems like it would be scientifically impossible for even you, Mr. President, to know whether you actually won the majority of votes.

That’s quite funny isn’t it? That you, the President of Armenia are not really sure, deep inside, whether you are the true chosen leader of your people or not.

That would really bother me personally. If I wanted to lead my people, I would really want them to make that decision for themselves, because I respect my people and that is their decision to make. Otherwise, I would take over Armenia and call myself the Governor General of Armenia or Dictator du jour or whatever moniker I felt like sporting that day. Maybe your party is out of control and the oligarchs are running out of caviar or something and they want to make sure that the flow of the good times doesn’t stop.

Whatever the case, it is time for change.

Whether you’ve won fairly or not, somehow you are now President, again.

What does that mean to you?

Yes, Artsakh is important to us all and we have to struggle together for our brothers there.

But what I mean is how are you going to progress the cause of Armenians, in Armenia and around the world?

How are you going to help pull the country out of its economic, social, and political dysfunction and turmoil?

Obama at least offers hope, even when he lets us down.

Years ago, I started a campaign asking President Obama to do the right thing and stick by his promise to recognize the Armenian Genocide.

You too took an oath, to the constitution of Armenia, to protect the country from enemies foreign and domestic. Those who steal elections from my people are domestic enemies that need to be punished.

It should be your duty to enforce that, even if some think it hypocritical. You should also consider dissolving Parliament and being the first Armenian reformist President who goes out of his way to make sure that future elections are fair and representational.

Serzh, everyone who knows me knows that I can’t stand injustice. And like most diasporan Armenians, I have always been reluctant to criticize your government directly and publicly. But the avalanche of people suffering under your rule due to corruption and injustice is tipping the scale for us all.

You need to know that.

Armenia is desperate for the rule of law more than anything else. And no one can be above the law. You can make that happen, now, by example and presidential decree.

Unite us Serzh. Inspire us.

Thank you for your time.