Ara K. Manoogian was the guest of Harut Bronozian’s Veradardz TV show on April 18, 2013. The topics of the discussion is the electoral fraud in the 2013 presidential election in Armenia, as well as the issue of boycotting Serzh Sargsyan’s supporters. Click here to learn more about Boycotting Serzh Supporters.

Ara Manoogian also briefly touched on his recent cross-country trip to the White House during his hunger strike. The purpose of the trip was to get a response from Barack Obama to his open letter, explaining why he congratulated Serzh Sargsyan who had Armenia’s presidential election rigged. Alternatively, the trip served the purpose of raising awareness among common U.S. citizens along the way about how Obama uses the people’s vote and trust to support undemocratic regimes around the world. 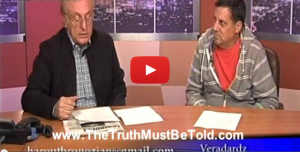